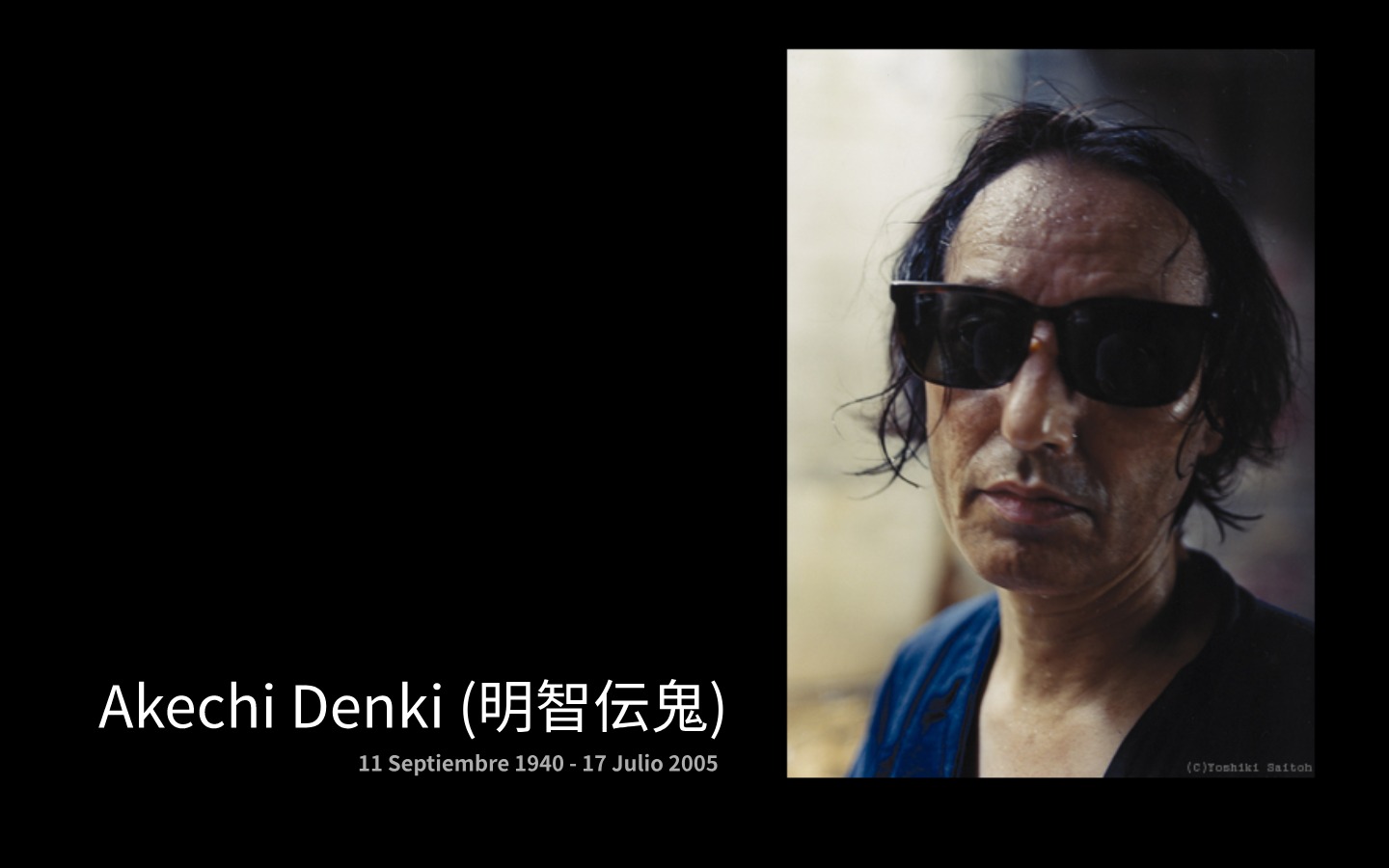 Today’s repost is of triple significance. Firstly, it marks the sixth anniversary of Akechi Denki sensei’s death. Secondly, the interview is the last time where the grandmaster shares his thoughts for the record. Thirdly, sensei’s very last words touch on the muga (無我) aspects of shibari/kinbaku, and it couldn’t have been said more beautifully.

Osada Steve: Japanese rope bondage is getting very popular in the United States and Europe and people want to know more about it. In the West there is something I call “bedroom bondage” — you tie the wrists and the ankles with very simple bonds and when your partner is restricted you begin with sex or SM play. But that’s different from Japanese rope bondage. How would you define shibari (縛り)? What is shibari to you?

Akechi Denki: In SM, shibari is communication between two people using the medium of rope. It’s a connection made with rope between the hearts of two people. So the rope should embrace with love, like the arms of a mother embracing her child. The submissive has placed her entire trust in you.The most important thing is never to cause physical injury to your partner. There are delicate tendons and nerves in the body and you have to be very careful never to damage them. If you tie someone up too tightly you might damage nerves. And if you don’t make your ties tight enough a rope can slip and catch on your partner’s shoulder or neck. It’s hard to believe that a single piece of rope could cause permanent damage but there have been many such accidents. You need to check your partner constantly and make sure she’s all right. Not with words but by checking her expression.

Yet almost all nawashi (縄師) wear sunglasses, particularly when they are doing shows. If your model can’t see your eyes, is she really able to communicate with you?

Communication is about much more than eye contact. You put your arms around her to see how she is doing, or you do something to her and judge her reaction. It’s really full-body communication. It can be very frightening to be tied up, to lose your freedom. You have to have good communication in order to make the person you’re tying feel safe. You want her to feel good.

What about the term nawashi? I think people in the West tend to mistakenly believe that there is some kind of qualification process before you can become a nawashi.

When did that term come into use? Maybe thirty years ago. Before that, no one used the term nawashi. When I started doing SM shows, everyone said sado (from the word “sadist,” to indicate the dominant) and mazo (from the word “masochist,” to indicate the submissive). In those days, the SM world was much smaller and people within it took their relationships very seriously. The sado was the master; the mazo was a willing slave to him. He might call her over and put his cigarette out on the palm of her hand, and that was accepted within the context of their very deep relationship. It was accepted that he could hurt her; that she was willing to give her very life to him. It wasn’t until later that people began to use the term nawashi for someone who did rope bondage as part of SM shows.So how does someone become a nawashi?

How did you become a nawashi? You have to understand that people like me, the old generation, started doing this in our teens. We got hold of SM magazines like Kitan Club (no longer published), and then we would try to imitate what we saw in the magazine, which was much simpler rope work than what you see today. And we practiced a lot. Not just rope but all the skills we used in SM shows. I had a five or six meter whip from America — a real cowboy whip. I used to practice for hours, throwing it again and again until I learned how to cast within a confined space and be able to hit with accuracy. We gained experience through repeated practice.

But the most important thing is having a partner with whom you share a deep, trusting relationship. That was the hardest part for me — finding partners. Forty years ago, you couldn’t just come out and say you were interested in SM. There were no SM clubs where you could go and find a woman who wanted to be tied up. So I would meet a regular girl and begin a regular courtship, taking her to coffee shops and the movies for six months or even a year, forming a very deep relationship before I even dared to bring up the subject of bondage. And even so, most girls would be shocked and horrified when I brought out a rope. They’d leave me immediately. Finally, one said, “Ok, but just a little.” I was so grateful I was crying as I started tying her. I would have done anything for her. It was like finding a precious jewel.

How old were you then? Sixteen or 17. I remember because in those days, you weren’t allowed to go into kissaten (coffee shop) until you were 18. That first girl worked as a waitress in a kissaten. And that first time, we went to a place like a dormitory. I had a weak digestive system so I always wore a sarashi and that’s what I used to tie her up. (A sarashi is a long thin cotton cloth that is wrapped around the belly because Oriental medicine teaches it is important to keep the internal organs warm.) Since I always wore a sarashi, I was always prepared if I got an opportunity for bondage.Very convenient!

Yes, and not just for bondage. Having a sarashi wrapped around your middle could protect you in a knife fight by deflecting or stopping the blade. And if you did get cut, the cloth helped stop the flow of blood. In those days, I worked at construction sites, which were pretty tough places. I was in charge of about 100 people but I knew I wasn’t a good fighter so I kept loyal people close around me. And I wore the sarashi.

Are you completely self-taught? Did you learn rope from someone? No one taught me. But I did become friends with Tsujimura Takashi, whose work appeared in Kitan Club in those days, and his friend Yamamoto Issho. They were based in Kansai (Osaka) but we would meet when we could and practice bondage together, and lend each other our partners.

How about the famous artist Ito Seiyu (1882-1961)? Did his photographs and paintings of women in bondage influence you? Not really. I have collected books of his art but he explored many subjects besides shibari such as traditional ghosts. I appreciate his work as art rather than inspiration for my own work.

I understand you have done a lot of research on hojojutsu, which is an ancient form of martial arts using rope. Yes. Because I was so interested in shibari, I went to various libraries and museums looking for information on the use of rope as a weapon. In a very specialized book on martial arts — I forget the name — I found diagrams for three examples and I studied those carefully. I learned some good techniques in this way, but rearranged them when I used them in my own work. The remaining hojojutsu schools closely guard the ancient techniques and I didn’t think they’d tolerate their techniques appearing in SM magazines.In the Sengoku era (about 1478-1605), warriors carried rope as a weapon. If you lost your sword, you could grab your rope and use it to deflect your enemy’s sword. You could toss your rope like a lasso to catch your enemy’s sword or put weights on both ends of a rope and throw it so it wrapped itself around your enemy’s body to immobilize him. Or around his neck to strangle him. I’m afraid much of that knowledge isn’t being passed on.But some modern police and military forces use similar techniques. The Italian and US special forces use rope for securing prisoners, tying it around the waist and then securing both thumbs. It’s simple but very effective and cheaper than handcuffs. I’ve heard that they learned this technique from traditional Japanese martial arts, and that the rope they use is very good.I also researched the techniques of the Edo period police force. The constables had different ties depending on the status of the person they were holding, and they developed different ways of tying prisoners depending on how they were to be transported. For example, if prisoners were being sent by boat to the penal islands, they wanted to leave the legs free so prisoners could get to the side of the boat if they became seasick.What I really appreciate is that you are always so supportive and positive. I’ve come to you to learn certain ties and even when my efforts came out terrible you praised me. You’re like that with everyone. You never say, “Oh, that guy can’t tie at all.” You obviously just love rope and love to see people doing shibari.

I think that’s why you’re so well-liked and respected in the SM world. I remember what it was like when I was just starting out.One last question: there are very few professional nawashi, and each has a distinctive style. Your style is very intricate and beautiful.

How did this develop? For me, the most important thing is that the rope work look good. My style developed in the course of stage shows, at a time when there weren’t yet videos. I felt it was important that I give the customers something unique, something they hadn’t seen before. So I had to develop my own style; the ideas had to come from within me. And my goal, my driving principle, is never to do the same tie twice. Of course, sometimes I do end up repeating myself but in my mind, I’m always trying to do something completely new. So even now, my style is still changing and developing.

When I get on stage at the beginning of a show, I don’t have any ideas about what I’m going to do. I empty my mind. Then the ideas just come to me, from within or from the partner I’m working with. Sometimes the ropes move on their own and my hands just follow, and that is always an amazing experience. I just disappear. The shibari is always very beautiful when that happens.